Norbert Bisky
Paintings and watercolours
Opening: 09-02-2008 from 17:00 - 19:00
Rotterdam, both rooms
In 2004 Cokkie Snoei was one of the first galleries to exhibit Norbert Bisky's work, in his solo show Rise and Fall.

In contrast with the large-scale works in that exhibition, ‘Minimental' generally contains very small pieces, thus proving that he is capable of painting ‘great' paintings on a limited scale.

The title refers both to the polarity between ‘minimalism' and ‘monumentalism' as well as to the ‘Mini-mental State Examination' (MMSE), a standard method use to test cognition. It can quickly identify issues such as forgetfulness and the severity of such problems. The test also provides us with population-based normative data, which can be used to compare an individual's MMSE score with that of an appropriate reference group.

According to Bisky we live in a pseudo-psychological and pseudo-healthy age, which he aims to question through his work. He would also like to reassure all those who may seek a psychological interpretation in the changes in his latest paintings that he is, in fact, healthy and happy. A significant leitmotif in Bisky's oeuvre is his fascination with the body: it's abject passageways, its excretions, disembowellings and flayings.

Bisky's paintings initially appear to deal with young and beautiful bodies. But his bodies are both victims and victimisers, grossly abusing each other. Sometimes they are cannibals, at other times appearing as violent tormenters, in which any sense of guilt or shame is completely disassociated. They urinate and ejaculate on each other's faces, vomit and ooze snot. The abject discharges of the male body are made evident at every turn.

But one must never forget what we are looking at, These are simply paintings. We are confronted with an illusionary ‘theatre of horror': a theatre in which blood is neither sanguine nor fluids fetid.

(Partially based upon a text by Mark Gisbourne) 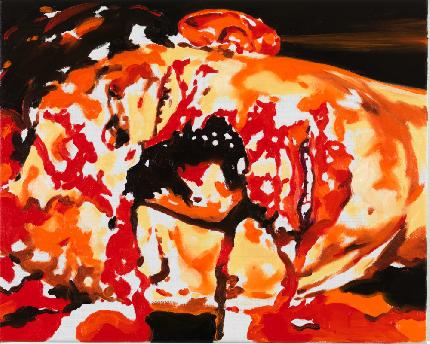