Paul M Smith
Photographs
Opening: 17-12-2006 from 15:00 - 17:00
Rotterdam, both rooms
Over the last decade Paul Smith has consistently examined the meaning and construction of masculinity, concentrating on the cultural and visual creation of various alpha male identities. He has subjected various forms of heroic behaviour and status to scrutiny. Smith has travelled from soldier via action hero to arrive in his current body of work at the contemporary society's hero and idol - the celebrity.

Simultaneously celebrated and denigrated, stars represent the embodiment of success, but also the ultimate construction of false value. Our lives and behaviour are conditioned by our experience of mass representations, as voyeurs who consume stories about and images of celebrities.

Smith has always used himself - his own image - to act out the very aspects of masculine identity he places under scrutiny. In his use of the self-portrait he has become an anonymous figure, a character both embodying and satirising ‘the male', as malleable and elastic as the technology used to create the image. The enacted scenarios are depicted with a corresponding carefully chosen visual language, so that the images are instantly familiar. It is within this recognition that Smith subtly subverts our understanding of the subject within, drawing us towards the fabrication of the aspirational male persona and the icon itself.

Smith's self-portraits have a scientific precision that calls to mind nineteenth-century studies of physiognomy. In these intricate studies of celebrity, using existing visual references from popular culture, the artist's skin becomes elastic, taking on the iconic facial features of the stars. During the process of image manipulation, Smith's identity dissolves into that of the other. From behind his own skin emerge the faces of some of the most iconic and celebrated men of our time including Elvis, Andy Warhol, David Beckham and Robbie Williams.

This work questions the cultural drive behind the need to assimilate these constructed celebrities. Through detailed analysis of figures ranging from Bono and Arnold Schwarzenegger to Michael Jackson, Smith investigates the general public's desire to associate with celebrity. He examines various kinds of stars, exploring the images of men that exist in the public sphere from feature films and music to art and politics. The manufactured face exists only within Smith's world of fictional heroes.

Faces that are instantly recognisable, yet eerily disturbing in their strangeness, confront us. In the duality of these faces, which are at once celebrity and something/someone else, we begin to realise that what we are encountering is not perhaps that which we initially perceived. 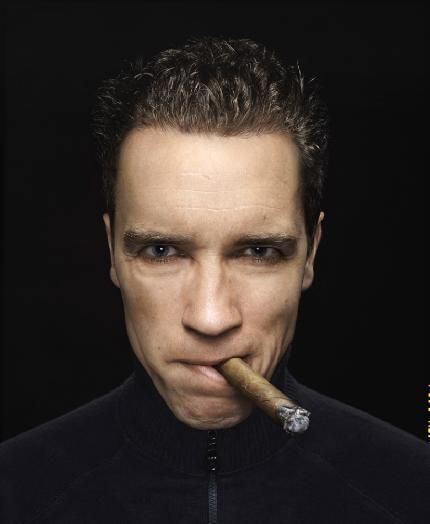