Bisky‘s new series of paintings and watercolours refers to the history of Christian paintings, to medical pictures and pop culture.

Crossing Jordaan refers to an ancient Christian mythology: once the people cross the holy river, they reach the promised land. (The story probably derives from Greek mythology.)

In addition to its biblical reference, the title refers to an American TV programme on CBS (Crossing Jordan) in which the main part is played by a crime-solving medical examiner.

But ‘crossing’ is also used in the graffiti scene; you cross another artist’s work simply by writing or spraying over it. It means you take over the (wall)space.

In his recent paintings Bisky crosses his own work. Literally as in "I changed", but also by adding different layers. Images, ideas and brush strokes fight for attention.

It appears that Bisky is taking his own life as well as parts of our trashy culture into the traditional oil-painting technique.

Although you still find some elements of horror, violence and natural catastrophes, Bisky paints the survivors, stronger and vibrant - and last but not least what counts most: Hope and Beauty.

Finally – ‘Crossing Jordaan’ refers to the location of Norbert’s first show in Amsterdam.

The Jordaan is a typical area of urban transformation; starting as a working class district it has now become a hip area. It has the right mixture between ‘high and low’. It is significant for our times, we live in transition.

‘Crossing Jordaan’ is a show about survival and hope.
After passing through different personal and social catastrophes such as death, terrorism and crisis Bisky realises that he is still alive.

It will be a show about hope!

He has had recent solo shows at the Haifa Museum of Art in Israel and the Dortmunder Kunstverein. 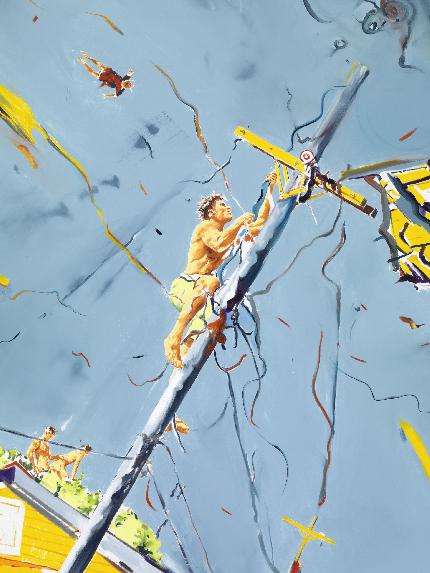