During his journeys through West Africa, Pieter Hugo has been confronted very often with Nigerian movies. Wherever he went, people were watching them. These movies are shot, edited and distributed in a period of a couple of days. No wonder Nollywood seems to be the third biggest film industry after Hollywood and Bollywood. Actors often receive the script on the day of the shooting, so there is no time to prepare for the role and character or immersing in the role.

Pieter Hugo first regarded these films as soap operas but than he started realizing that they were interesting in their own way because they were in many respects among the first examples of contemporary, mass media self-representation in Africa. These are movies made by Africans for Africans, with their own stories; the films are rooted in contemporary culture and a mass self-representation at the same time.

While Hugo was shooting the last part of The Hyena and Other Men, he shot one or two images on Nigerian film sets. While he was there, he met Gabazzini Zuo, who is a make-up artist. Zuo assisted on the project. He helped Pieter preparing costumes and make-up. In the process of constructing the images they became something very different from what could have been seen in the beginning as a quasi-documentation of Nollywood.  In the project all was very organic, there was a synergy between the actors, the sets, the scenario of Nigerian film sets and then Pieter Hugo as a director, as a catalyst. The tableaux of the series confront us with a verisimilar world: the situations are clearly surreal, although they could be real on a set.

shows some images from the series 'Wild Honey Collectors' and 'Boy Scouts'.

The wild honey collectors working alone and in groups in Ghana, spend the day in the forest seeking out bee nests and honey. Their method of collection is clumsy, and in part reflects a lack of resources to cultivate their own sustainable hives. After chopping down a tree that contains a wild bee nest, they set fire to the area surrounding the grounded nest, forcing the bees to flee the ensuing smoke. With cassava branches attached to their hands and necks - the scent of the leaves being disliked by the bees - and black plastic bags over their faces, the men collect honey which is usually spoilt by the soot from the fire.

When Pieter Hugo was in Liberia on a commission to photograph the first black female president in Africa- Ellen Sirleaf Johnson, a group of boys walked past dressed in a mix match of boy scout uniforms. Their uniforms were made-up from second-hand uniforms donated by Boy Scout groups in more affluent countries, and although the uniforms are often the wrong size and come with existing badges, they are worn with pride and honour. As the worldwide movement of Boy Scouts is associated with a peaceful civil society, not a country that has just survived fifteen years of civil war and whose previous president, Charles Taylor, is to be tried for war crimes. In this context, children in uniforms invariably suggest child soldiers, and yet these boy scouts in dapper uniforms are practicing the scout motto 'Be prepared' and the scout slogan 'Do a good turn daily'.

Hugo began as a photojournalist, traveling for work he started developing relationships with the places he found himself in. ''My artistic practice is deeply connected to this engagement with what surrounds me; it is an aesthetic analysis of these places. For me it evolved organically: I didn't have a premeditate plan on how to proceed, photojournalism evolved to 'art'.'' 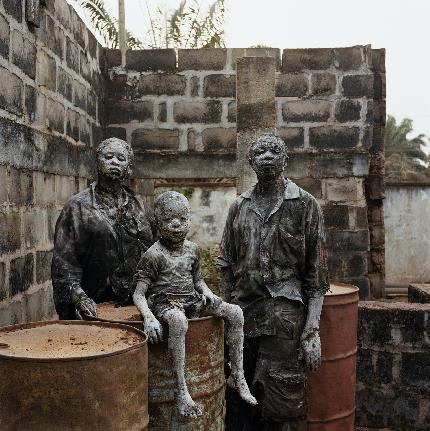